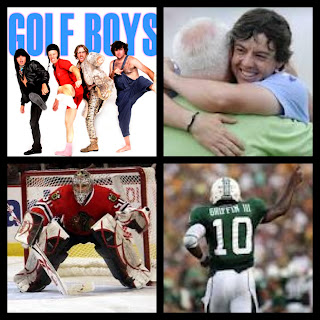 January is a month for rejuvenation and looking forward to great things in the year ahead. It is also time for reflection of the events and memories that stand out from the previous year. Here are some of the moments I remember most from the world of sports in 2011:

1/3/2011 The Golf Channel rolled out a new morning show. Morning Drive was not only successful and greatly influential in its first year, it gave an exciting new buzz to the golf world. Everyone that worked in golf or was a fan of golf was talking about Morning Drive. It is now my favorite way to wake up in the morning. Among the topics discussed on the show are a couple of my favorite stories of 2011. The Year of the Rookie: 7 wins on the PGA Tour in 2011, were earned by 6 PGA Tour rookies. Two of these wins were majors. The Golf Boys: The un-official boy band of the PGA Tour, consisting of Ben Crane, Bubba Watson, Hunter Mahan and Rickie Fowler. Their single Oh, Oh, Oh…still makes me laugh and raised good money for charity.

3/27/11 For the second year in a row…and in only their second year as a franchise… the Oklahoma City Thunder clinched a trip to the NBA Playoffs after a 99-90 win over Portland. 5/25/11 Dallas Mavericks beat the Thunder 100-96 on their way to the NBA Finals in game 5 of the series. 6/12/11 Mavs won the NBA Championship title in Game 6 over the Miami Heat.

4/4/11 University of Connecticut beat Butler 53-41 to win the NCAA Men’s Basketball Final Four Championship in Houston. This is significant because for the first time in years I could not remember just now who won! All I could tell you is that St. Johns was the March Madness team in 2011 that the country discovered for possibly the first time. 3/17/11 St. John was eliminated from the tournament by Gonzaga. 4/2/11 I became aware of the best golfer to come out of St. Johns University…this also took place in Houston. What a great 2011 for PGA Tour rookie Keegan Bradley, who won the Byron Nelson and the PGA Championship in his first attempt at a major.

4/10/11 Rory McIlroy led or co-led the entire 2011 Masters until the 10th hole of his final round. One wayward shot led to an epic collapse. I literally paused the coverage on my DVR and said a quick prayer for the kid. He was so off focus and emotional. McIlroy walked off the course at Augusta, after losing the championship to Charl Schwartzel, with his head held high and gave a very inspiring and positive post-round interview. However, you knew he was hurting. 6/19/11 Rory McIlroy won the U.S. Open in dominating fashion. McIlroy won by a record low score of 268, 16 under par. The 22-year-old hugged his father Gerry that day on the 18th green, surely one of the best Father’s Day gifts Gerry has received from his son.

4/26/11 Chicago Blackhawks were knocked out of the NHL Playoffs in Round 2 by bitter rivals the Vancouver Canucks after a 2-1 overtime loss in Vancouver. Though my beloved Blackhawks left game 7 with a loss in hand and visions of defending their Stanley Cup wiped away…it was one of the most intense and fun games of hockey I have ever seen. The game went down to the nail biting end after Chicago came back from a 3-0 deficit in the series to force game 7. The highly visible Canadian Olympic Gold Medal winning goalie Roberto Luongo had 31 saves in the game after struggling in the series. However, he was evenly matched by Chicago’s rookie goalie Corey Crawford who ended the game with 36 saves. It was an incredible battle between two beasts. The Blackhawks went from just sliding into the playoffs to being a legitimate threat. It was in a word: Crawsome.

5/31/11 It was announced that Winnipeg, Manitoba would get an NHL hockey team, once again, much to the elation of Winnipeg residents. 6/4/11 Season tickets for the Jets games were sold on in 17 minutes.

5/31/11 On the same day…this side of the border, Jim Tressel resigned as Ohio State’s head football coach. This was amid NCAA violations due to players selling championship memorabilia for tattoos. Tressel’s knowledge of players receiving improper benefits from the tattoo parlor’s owner, keeping it quite and then lying about this knowledge till confronted with emails, landed him in hot water. This scandal at Ohio State seemed dicey at best...till November rolled around. 11/9/11 Penn State Head Football Coach Joe Paterno resigned at age 84. Paterno had coached football for 61 years and it was often thought that he might literally coach at Penn State for the rest of his life. However, after also holding knowledge that should have been made know he was all but forced to make an exit. Joe Paterno was aware of at least some of the facts surrounding his long time Defensive Coordinator Jerry Sandusky’s part in the abuse of at least 8 children. Kind of makes tattoos in exchange for some National Championship bling sound like less of an issue huh?

9/28/1 The final day of the 2011 MLB regular season. Two comebacks in extra innings and 4 key games to dramatically change which teams would have a spot in the playoffs. The Rays came back from a 7-0 deficit in the 8th inning to beat the Yankees in extra innings and earn the AL Wildcard…only because the Orioles beat the Red Sox in extra innings within the same hour. The Orioles celebrated as if THEY were in the playoffs, however they were just proud to have thwarted the Red Sox from moving forward into the post season. The Cardinals won easily in Houston to keep them in the hunt for a playoff spot. Since the Braves topped off their disappointing season by losing to the Phillies…this sealed the playoff berth for St. Louis. 10/28/11 The Cardinals won the 2011 World Series, beating the Phillies along the way.

11/19/11 8 Seconds. Isn’t that a bull riding reference? A sappy movie with a guy from 90210 as the star cowboy? With only 8 seconds left in the Baylor vs. Oklahoma game, Baylor’s Robert Griffin III threw a touchdown pass to Terrance Williams to steal win from the Sooners. The Bears won 45-38 and on 12/10/11 Waco’s Honey BEAR RGIII won Baylor a Heisman.

Thanks for everyone who took time to read my blog in 2011 and years before. Hopefully, I will make more time to write in 2012. Cheers!
Posted by Kara at 11:16 AM