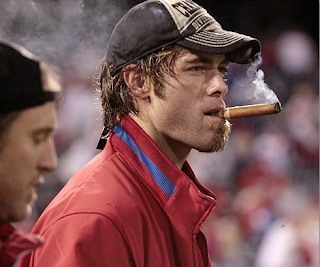 There is a lot of glitz and glam in sports. Sure, sports is competition, aggression, and raw athleticism. However, you don’t get on MTV Cribs without some glam. You don’t get your own reality TV series either…not one…nor two as in the case of Terrell Owens and Chad Ochocinco. Along with anything glamorous, there is always a side that is a bit less-attractive. Suspect, distasteful, or grimy if you will. Here are a few examples that come to mind:

Evan Longoria: has an AK-47. Well, he did till it got stolen from his spring training apartment in Port Charlotte, Fla. Not sure why Longoria had an AK-47?! The Rays third baseman probably purchased it after his 1967 Camaro was stolen earlier this month, or maybe after that guy stole his hat! Wait…that was just a commercial. I should mention this AK-47 was owned legally by Longoria. Camaros and AK-47s. Sounds like a movie that would star Jason Statham doesn’t it? At least Longoria was driving a classic Camaro, which is much more glam than some of the vehicles driven by other players to spring training. Mark Buerhle of the White Sox was spotted with a vehicle parked in the lot that literally resembled a mini-semi truck and dwarfed the Tahoe beside it. Jason Werth (Nationals) has driven a truck to Florida that, I was told, was every bit as obnoxious as his unkempt beard and louder than a whole monster truck rally! These MLB stars use spring training for two things: a time to prepare for the season, and a time to let the wild, grimy boy in them out. Back to work boys!!

Hockey Thugs: On February 11th, the New York Islanders beat the Pittsburgh Penguins 9-3. Notable grime here? There was a total of 346 penalty minutes in the hockey game and ten ejections. If you are unfamiliar with the game of hockey…that is not normal. That is far uglier than the normal cross-checking, high sticking and occasional break-out fight or two. That kind of display is not even hockey, but an ugly bash that makes the street fight scene in Anchorman look low key. Know your sport…the object is still supposed to be scoring goals. The sport of hockey gets uglier by the week, and injuries are getting far worse than just bad breaks.

Geno Auriemma: Connecticut women’s basketball coach, Geno Auriemma, is one of the most accomplished coaches in division one basketball. Unfortunately, he is also one of the most cold, condescending and unapproachable. On March 22nd, the Huskies beat Purdue in round two of the NCAA tournament, before a crowd of 5,729 in their own Gampel Pavilion, which seats a total of 10,027. It was the smallest crowd to see the UConn women’s team play since 1994. Auriemma was upset about the small attendance. In the post-game press conference he stated, “I think we have a real spoiled group of fans. I think free parking and handouts at the game would help. Letting some of the fans participate in coaching the team, since they always volunteer to do that.” I understand being spoiled, and I also understand it was an NCAA tournament game, but that is still a decent number of fans for women’s basketball. The University of Oklahoma women’s basketball team (20-10 regular season), which may not be UConn but is still considered a top-level program, averaged about 4,000 in attendance this season. The OU men’s team only averaged about 10,500 at Lloyd Noble Center with a capacity of 12,000. Though these comments are no surprise to anyone who is familiar with Coach Auriemma, they don’t exactly motivate fans to come on out and support the Huskies. I had a personal encounter with Coach Auriemma’s ugly attitude in December of 1999. UConn visited Norman to play the Sooners, winning 84-68. Since I was working for the University of Oklahoma Athletic Media Relations, I knew I would have the opportunity to meet the coach. In high school, I was a big Rebecca Lobo fan. She had played for Connecticut and had written a book with her mother who had battled breast cancer. Lobo had signed my copy of the book when I met her in 1996, and since Geno Auriemma had written the forward, I wanted him to sign it as well. I looked forward to this moment and to chatting with him for a bit. After the post-game press conference in Norman I approached Auiremma. Ouch! I was met with a cold and rude coach that was barely willing to sign my book, much less offer any kind words to a young college student. I ended my admiration of the Connecticut head coach precisely at that moment. I had the privilege of meeting many coaches while at OU, and he was by far the most disdainful. I consider Roy Williams every bit of, if not more so, the basketball legend Auriemma is. Williams took ample time to visit with me and make me feel appreciated as a fan. What is so hard about that Geno?!

Dez Bryant: Finally, a short word about the less-than-stellar wardrobe of some professional athletes. If you live in Dallas you probably know that Cowboys wide receiver Dez Bryant was issued a criminal trespass warning by off-duty Dallas PD officers working at North Park Center last week. Bryant was given this warning because he began using profanity after he and his entourage were asked to pull their pants up by the officers. That is right folks…sagging pants worn by a first round draft pick who signed a $12.05 million over five years contract in 2010. Bryant went to Oklahoma State…you would have thought the Cowboys in Stillwater would have taught him to wear better fitting jeans! 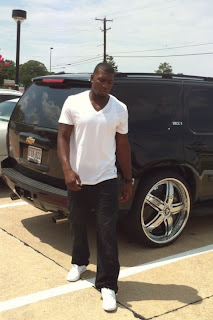 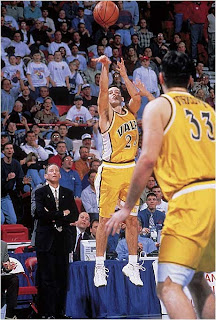 What is your favorite weekend out of the year? I have two: the weekend of the Crowne Plaza Invitational at Colonial Country Club in Fort Worth, and the weekend of rounds one and two of the NCAA Men’s Basketball Tournament. Wait…correction…rounds two and three of the tournament. This year the NCAA decided that instead of a pool of 64 they would allow 68 teams into the tournament. There was also an extra “round” added. The first two nights would consist of two games each, determining the four additional teams that would be added to the tournament. So, in other words, play-in games. This was no round one. Call a spade a spade. Doug Gottlieb, ESPN Basketball Analyst, illustrated quite effectively that it was like his wife getting an invite to the neighborhood barbeque. The invitation says it starts at 7’oclock…and she actually wants to show up at 7’olock. You don’t show up to the party at seven. You show up around 7:30…8:00…8:30. Everyone knows that…everyone but the NCAA apparently. Don’t call play-in games round one and don’t expect us to watch them. We will show up when the dance really starts...and we won’t stop partying till closing time!
I don’t really know why year after year March Madness gets my total attention, but I can assure you that it has me wrapped around its finger like a controlling boyfriend, demanding all my attention and dictating my schedule. I have filled out a bracket since I was about twelve years old. I get super competitive about my picks and highly frustrated when things don’t go my way, and they usually don’t. I mean who picks Morehead State to beat Louisville...that knows anything about basketball?! The best part about filling out a bracket for the NCAA Men’s Basketball Tournament is that no matter how much you know, or how much research you do, you will most likely be stunned, frustrated and humbled within a day of the tournament. However, every now and they you get it right, and it is so satisfying. In 1998, my brother-in-law took me to the Midwest Regional first round games at the Myriad Convention Center in Oklahoma City. I was big Kansas Basketball fan growing up so I went to see Kansas play Prairie View. The game prior was Valparaiso vs. Ole Miss. I was the only one in our section cheering for Valpo because I had picked them in my bracket. With a Bryce Drew buzzer beater 3-point shot, Valpo advanced! It was an incredible moment, and one that is mentioned every year during the ESPN Bracketology special…a note as to what could happen. It happens every year…it is what literally makes March such madness…it is why we even care. Upsets make sports thrilling, whether we are benefiting or barely able to stomach them.
Posted by Kara at 6:59 PM No comments: