Dallas is Trending: Local Pro Teams Making Dallas the Place to Be! 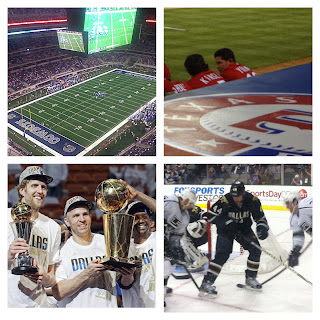 I’m one of those people that always desire a new adventure, new places to experience and a new environment to thrive in. I have lived in the Dallas Fort Worth area for several years and I always catch myself saying that I want to move to Denver, San Diego or anywhere but Dallas. I’ve met athletes and musicians that say Dallas is one of their favorite cities to visit. Until recently I just didn’t buy into those statements. I would tell them they are crazy…that it's easy to say Dallas is fun when you have the luxury of actually living in a great place like Chicago or Jupiter, Fla. It’s Texas people! Also…I’m an Oklahoma girl that doesn’t believe that Texas is truly a great nation of its own. Despite my doubts, in the last couple of months I made a conscious decision to take in all that Dallas has to offer and to really embrace this city. A huge part of that, if you are a sports addict like me, is learning to appreciate the home teams. The following is a look at what we are working with in DFW. The Dallas-Fort Worth area is laid out like this: Dallas to the east, Arlington in the Middle and Fort Worth to the West. The Mavericks and the Stars play in the American Airlines Center in downtown Dallas. The Cowboys and the Rangers compete in Arlington, a block away from one another.

I will go ahead and get the obligatory Cowboys blurb out of the way. It is quite simple. We are not “living the life” here in Dallas nor reaping any rewards associated with pride and victorious spirit, due to any accomplishments of the Cowboys. The Dallas Cowboys have made it to the post-season five times since 2000. In 2010 the team won the NFC Wild Card, their first playoff win since 1996, only to lose the following divisional game. No one is jumping on that band wagon! One would hope that at least some members on the Cowboys roster would catch some of the Rangers fever to win, since they are in close proximity, but it hasn’t happened yet.

The Rangers are making scorching hot Texas summers even hotter…and much more tolerable. In 2010 the ball club made their first World Series appearance since moving the organization to Texas. In 2011 the Rangers made their second trip. Since 2000 only three American League teams tout multiple World Series appearances: Texas, New York and Boston. If you know anything about baseball you are aware that being in a grouping alongside the Yankees and the Red Sox means success, national attention and confidence. Instead of being just one of 14 AL teams, the Rangers are now a highly relevant club in a city full of other successful and elite professional sports teams. How ya like that Jay-Z?! Fans should look forward to the 2012 season, with an $11.5 million dollar renovation to the centerfield plaza and visitor bull pen underway at The Ballpark in Arlington, and C.J Wilson the only notable free agent with a probable exit from the team, things are looking solid. The Rangers should make a strong push for the playoffs in 2012. DFW may never be granted the opportunity to host another Super Bowl…but the area will most like host another World Series!

Let’s move over to downtown Dallas, where dining options and nightlife are on a whole other level if nothing else. Before we discuss basketball let me remind everyone that the Dallas Mavericks ARE the reigning NBA Champions. That may not be much for Mavs fans to hold onto right now but it is still huge. In case you have no idea how things work on the professional hardwood, the Mavs hosted their 2010-2011 season opener on October 27, 2010. Due to a lockout, (I won’t go into detail) there has yet to be an NBA game played this season, and I for one, am not looking to see one played any time soon. Hold onto that NBA title Mavs fans, it has been the first and only in Dallas since the club hit Dallas in 1980, but it is still an accessory no other city has the chance to claim right now.

What have the Dallas Stars Benn up to?! No typo there…I am saving the best for last. Since we are in Texas…not the Midwest, the northeast or Canada, you may need some urging and education to grab onto the local NHL team. I know most of us have a hard time getting excited about hockey at first. It is often not in our blood. We didn’t play it growing up, it is not a family tradition like football on Thanksgiving and most of the athletes are foreign anyway. However, if you love sports you need to trust me on this. Hockey is the fastest, most aggressive and demanding sport played. Lucky for you, the Dallas Stars are a team to beat this season. Yes, some of you thought the Stars would struggle after the loss of center Brad Richards to the New York Rangers. However, with guys like left winger Jamie Benn, right winger Loui Eriksson, center Steve Ott and team captain Brenden Morrow looking better than ever, it makes sense that the currently Stars lead the NHL Western Conference.

So, you might not be skiing on the weekends like you would as a Colorado resident. You won’t be eating the freshest seafood and perfecting a golden tan, whilst watching surfers on a Saturday, as you would in San Diego either. Yet, Dallas residents should feel secure that the city we live in is trending. It is a hot spot of fashion, fine cuisine and successful professional sports teams…that are only getting better.
Posted by Kara at 11:48 AM