Making a Difference In the Offseason 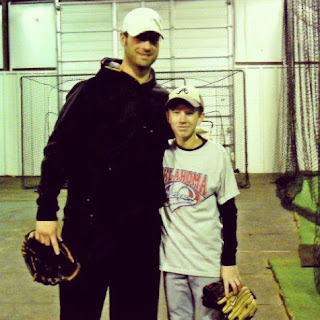 For baseball fans the offseason is a time of impatience and anticipation. Sure, we understand that players need rest and that trades and re-grouping must take place at some point, we just wish a week was long enough. We think of MLB players and wonder what exactly they are up to during all the downtime. We know what some of them are up to because they pop in and out of our Twitter newsfeeds quite often. Some guys, however, go under the radar for a few months. Though, a little time outside of the spotlight is much deserved, praise is also deserved when a guy takes time during his off season to make a difference. Let the light shine on Minnesota Twins right-handed pitcher Nick Blackburn. The 30-year old from Ada, Okla., took the time this winter to make a small gesture that made a big impact on one deserving fan.
When you are a junior high kid with a huge passion for baseball, your main worries should be centered around how well you played your last game, current news surrounding your favorite MLB team and what homework assignment you need to turn in the next day at school. Unfortunately for 14-year-old Dylan Hargus, the past year left him with a bit more on his mind. In May 2011, Dylan had finished his first season of pitching for Amber-Pocasset Junior High’s baseball team in Amber, Okla. His older sister had just graduated Amber-Pocasset High School, his older brother had moved back home from college for the summer and his parents were celebrating their 25th wedding anniversary. To celebrate, the Hargus family departed on their first family vacation to Mexico. One short day after landing in the Caribbean, the family was called with devastating news. On the evening of May 24, 2011, a large outbreak of tornados developed and moved across Oklahoma, and the surrounding states, killing eight and injuring 60 in Oklahoma alone. One of these outbreaks caused extensive damage in Grady County, southwest of Oklahoma City. It was soon discovered that the tornados completely demolished the Hargus home and farm located just east of Chickasha, Okla. The Hargus family was left without a house, vehicles and almost all of their belongings. Included in the loss were Dylan’s horse and the rest of their farm animals. Most importantly, the family survived since they were not at home. Though this was a huge blessing, surviving a traumatic event and having to pick up the pieces and start over was somewhat overwhelming for young Dylan and his family. Less than three months later, Dylan’s maternal grandfather, whom he was quite close to, suddenly passed away. The year had been tough, and by the time the holiday season rolled around, Dylan was in need of some cheer.
On December 12, 2011, cheer was exactly what he got. Blackburn had sent Dylan an early Christmas gift of a #53 Nike glove and a signed ball and baseball card. Dylan said, “I was really shocked.” However, it wasn’t a total surprise to his parents. A few weeks prior, Bryan Hargus encountered Blackburn in Norman, Okla. Blackburn was a familiar face to Bryan. In January 2010, his son Dylan had received a private pitching lesson from Blackburn at the baseball facility at Amber-Pocasset High School. Dylan had entered a silent auction for this lesson at the Grady County Basketball Tournament in Ninnekah, Okla. Alicia Blackburn, Nick’s wife, was the Ninnekah High School softball coach at that time and had submitted the prize.
During the encounter in Norman, Bryan struck up a conversation with Blackburn about the pitching lesson. When Blackburn asked how Dylan was doing, Bryan made him aware of the unfortunate events that his son had been subjected to that year, and noted that the signed baseball and card Dylan treasured, from the pitching lesson, were lost in the tornado as well. “He (Blackburn) took down our address and said he would send Dylan something,” said Dylan’s Mother, Dana Hargus, “but we didn’t know if he would remember.” Blackburn did remember though, and such a small package brought a great amount of joy to the family just a few days prior to Christmas. “Dylan was surprised and had a big grin on face,” Dana recounts. “He (Dylan) was excited and went straight into his room to put the items on a shelf, and took pictures with his phone to send to friends.” The special items sent from Blackburn were a nice touch to Dylan’s new room, as the Hargus family moved into their newly re-built home the week prior to Thanksgiving 2011.
Oklahoma is a great distance from Target Field, the Twins’ home field in Minnesota. However, Dylan was able to make a trip to Arlington, Texas last summer to watch Blackburn pitch for the Twins in the first game of four in a series with the Texas Rangers. The family plans to catch the Twins series with the Rangers again this summer, as well. It only takes a little effort to gain a fan for life. It is doubtful Nick Blackburn was thinking about boosting his fan base when he took the time to send a special gift, it would seem he wasn’t thinking about himself at all.
Posted by Kara at 12:29 PM