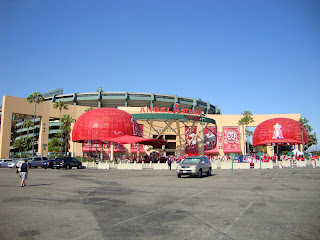 From San Francisco to Anaheim, National League to American. Welcome to Angel Stadium of Anaheim. Let it roll of your tongue. Los…Angeles…Angels…of…Anaheim. Ok, so the name is slightly unpleasant and trying, especially for life-long Angels fans. However, the home ballpark for the Angels is quite the opposite. The updated version of “The Big A”, as fans call it, was complete in time for Opening Day in 1998. I am sure there is no argument that it was an adequate improvement to say the least.
As you arrive, park conveniently just outside Angel Stadium for under $10 and make your way toward the welcoming two giant Angels’ hats that adorn the impressive entrance. Leave your jacket in the car, as the California sun should be fully present for the game. We ate in Downtown Disney prior to the game, so I am not able to suggest my favorite food option. However, I did read that in 2011, ARAMARK added 11 new dinning venues to the park and 50 new menu items. Head over to the outfield plaza sponsored by Coors Light to make a selection, and even enjoy the outside bar area. While in the outfield, take note of the “California Spectacular.” This landmark of the stadium is a pile of boulders, some of which are appropriately in the form of an “A”, in left centerfield equipped with geysers that erupt and stream down the side throughout the game.
If you don’t have tickets yet, let me tell you which ones you want to save your pennies for. In between the home and visitor dugout, 50 feet from the batter’s box, are 10 dugout suites that hold 12 people each. Can you imagine that game experience?! If you aren’t quite so privileged, you will still enjoy the game. Look out from your seat, past the cars speeding by on Highway 57, and take in the view of the San Gabriel and Santa Ana Mountains, along with the Brea Hills. We were lucky enough to enjoy a post-game concert featuring Dierks Bentley the night of the game we attended. Though, I always enjoy seeing Dierks, the acoustics in the ballpark left a lot to be desired, as you would imagine.
As you head out of the park, you will hopefully get to see the halo atop the long standing “A” marquee lit up to signal a home or away game victory for the Angels. As an added bonus, it should take you no time to get out of the well flowing parking lot. Now…go light up L.A!
Overview: Convenient stadium access, view of the mountains, nice weather, plenty of food options, and not a bad seat in the park. 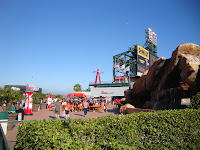 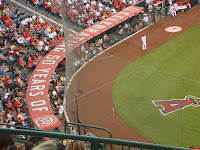 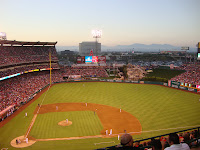