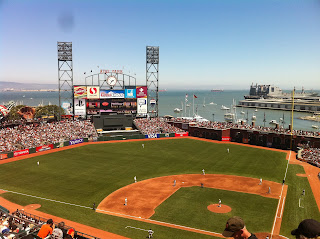 Is there anything more American than catching a baseball game on the Fourth of July? Try one of the greatest American cities (San Francisco) in one of the most coveted ballparks in America (AT&T Park), watching the reigning World Champion Giants, in perfect California Bay Area weather. Yeah…it was a great holiday. The Giants moved from Candlestick Park to their new home at AT&T Park in 2000. Originally, the park was called Pacific Bell Park, however, it was re-named SBC Park after the company’s acquisition of Pacific Bell in 2003. When AT&T merged with SBC in 2006 the park was re-named once again. I might note at this point that my iPhone worked just fine under AT&T service at the crowded park. My friends and I chose to park at Pier 39 for the game, since we planned to return there afterward. We hopped on a cable car then hopped off a few blocks from the stadium to walk the rest of the way, past the San Francisco Bay Bridge. Outside the stadium, you are greeted by a massive Willie Mays statue surrounded by 24 palm trees in tribute to the number 24 jersey Mays wore as a Giants’ legend. The right field wall inside AT&T Park is 24 feet high, also in honor of Mays. When you enter the stadium take some time to walk around and check things out before you settle down in your seat with a fresh order of garlic fries and clam chowder in a bread bowl. As you start out to explore AT&T Park, first take in the scenery. It is without a doubt one of the most picturesque views of any ball park in America. Gazing out to the San Francisco Bay, fans might have the tendency to drift away from the game at hand and simply enjoy the view and the nice San Francisco weather. It was July, so it was hot, but still bearable. Those attending a night game would most definitely need a jacket to stay comfortable though. Next, cruise on down to the promenade level of the stadium. Beginning in left field you will find a key area of excitement for kids or kids-at-heart, known as the Coca-Cola Fan Lot. A giant Coke bottle will stand before you that is actually an 80 foot long slide that lights up at night. I am still kicking myself that I didn’t take the time to go down that slide! Kids can also enjoy a giant baseball mitt, the Little Giants Mini Ballpark, and a cable car donned with a sign that boldly states “No Dodgers Fans Allowed.” In centerfield there are four pillars that shoot up water upon each Giants home run and victory. These pillars stand just above the very notable Levis Landing. Levis Landing is host to the Splash Hits board. Each Giants home run that is blasted outside the park to McCovey Cove is called a Splash Hit and these hits have been recorded cumulatively since the park opened. There have been 58 recorded Splash Hits by Giants at AT&T Park. Barry Bonds was responsible for 35 of them and Pablo Sandoval takes credit for the one I was fortunate enough to see on July 4, 2011. (Number 56 in the tally) McCovey Cove is the area of the China Basin just outside the park in right field. The Cove (as called by Giants fans) is named after former Giants first baseman Willie McCovey and is frequented by boats and kayaks enjoying the atmosphere and hoping to secure a coveted Splash Hit ball. Last stop around the promenade is the strikeout board in right field. This record of Giants strikeouts-per-game is manned by fans that place a K on the board for every strikeout earned. Now, make your way to your seat and enjoy the game. Try not to get too distracted by the sites that you miss a possible Splash Hit and the certain fight that will follow out in The Cove over the ball. After the game, head back over to Pier 39 for some excellent seafood and night life. Not all of you will be blessed enough to watch fireworks over Alcatraz…but there is always fun to be had in San Francisco. Overview: Unbeatable view of the San Francisco Bay, a giant Coke bottle slide (do not turn it down), nice weather, suspense of a possible Splash Hit and a great American city to enjoy while in town.
Overview: Unbeatable view of the San Francisco Bay, a giant Coke bottle slide (do not turn it down), nice weather, suspense of a possible Splash Hit and a great American city to enjoy while in town.

McCovey Cove and Strikeout Board
Posted by Kara at 1:29 PM