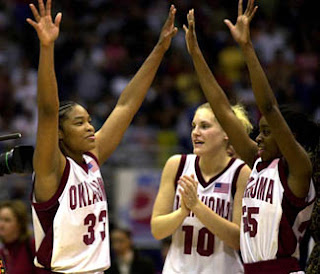 I try to state the facts…as any so-called journalist would. So fact: my post for today was going to come from a far different angle till I had a change of heart this morning. I had decided yesterday to blog about women in sports, commentators in particular, and raise the question of how the public views women athletes, coaches and media representatives and weigh in with my opinion. However, after receiving the heart breaking news of the death of former University of Oklahoma Women’s Basketball standout Rosalind Ross, I quickly changed my path.
Let’s face it. I’m a baseball fan, a PGA tour junkie, and I get hyped over Sooner and Irish football and Blackhawks hockey. Not much in there speaks of a devotion to women’s athletics. Little known fact: I have some pretty strong ties to the University of Oklahoma Women’s Basketball Team. I attended every OU WBB home game in the four years I was at OU in a working capacity. For two school years (1998-2000) I worked for The University of Oklahoma Athletic Media Relations, my senior year (2001-2002) I was in charge of the Lil’ Sooners program through the marketing department and I lived with a couple of team members. However, my junior year (2000-2001) Oklahoma Women’s Basketball was about 50 percent of my life. I worked in the office, was a member of the team manager unit (shout-out to Kamoche, Mary and Lindy), stayed at Lloyd Noble Center at all hours of the night doing their nasty laundry, house-sat for Coach Jan Ross and begrudgingly ran errands for Coach Sherri Coale. The works! Was it my fondest job? No. Thankfully though, I have some incredible memories. One of my best friends is a result of this opportunity and I was blessed to be a part of the lives of some truly strong, talented, fun and memorable women.
From the outside, we had a pretty unique team of girls. No offense, but take a look at most women’s athletic teams and you don’t always find the most attractive, witty, smart, well-rounded group. These girls were different. Diverse all-american girls. The kind you are proud to travel with…as a group of tall attractive confident women draw quite the attention! Take away all the fluff and you are left with some real substance. Former Oklahoma forward Caton Hill earned her medical degree and is now a U.S. Army Captain serving as a flight surgeon in Afghanistan. Caton could hammer down some rebounds with great authority…now she is putting that same strength to use in such a powerful way to serve our country.
No matter who the girls are though…you are still working with a bunch of girls. Being a Division 1 athlete leaves you privileged, does it not? Somedays, the demanding prima donna bug would bite. Oh nothing too bad, just the typical I don’t want that flavor of Gatorade type thing. Ha! There were three girls that always stood out to me as winning the “award” for laid back, grateful and no complaints. Emily Britt (Page) who is still one of my very best friends, and still never complains or speaks a harsh word. LaNeishea Caufield (-Daniels) who is an Oklahoma WBB legend, a proud mother of two and has a heart as big as Lloyd Noble Center itself.
Lastly, and the reason for this posting, was Rosalind (Roz) Ross. Roz never, and I mean never, complained…to anyone as far as I was aware. Roz was from Milwaukee and was very proud of her hometown. I recall the first time I met her. Roz and LaNeishea were riding with me to a team event and Roz was telling me all about coming from Milwaukee to Norman, Okla. Some days Roz was quite, focused on working hard and her job as a strong force on the team. Most days though, Roz was silly. Chatting, laughing and teasing. She was always so respectful and kind. She did not want special attention, that is just not who she was. The news of her harsh death in her beloved hometown of Milwaukee has pained so many who knew her. In a statement, former teammate Caton Hill is quoted, “Roz was a true, good person who was one of the grittiest, hard-working teammates I have ever had. I am incredibly sad that I will never hear her high-pitched, speedy banter again or be able to joke back and forth with her again.” True grit. I know this is how all of her teammates would respond. Grit is exactly the word. Not simply because she hailed from Milwaukee. Roz was an integral part of a 2002 national runner-up team that put Oklahoma Women’s Basketball on the map and in the record books. She helped to lead the 2001 team to the NCAA Women’s Sweet Sixteen in Spokane, Washington. Topping off her success she was drafted in the first round (16th overall) of the 2002 WNBA Draft, by the Los Angeles Sparks. She did all of this, working hard day-in and day-out…with a torn ACL. The injury was received in high school and she did not even know it until she reported for preseason practice at OU in 2000. She played without surgery and without anyone ever thinking about it, because she never brought it up. What an amazingly strong woman. What a blessing to have personally witnessed this strength.
To the memory of Roz Ross and her dear friends, her Sooner family, and her sister LaNeishea Caufield.
Photos: #33 Rosalind Ross, #10 Caton Hill and #20 LaNeishea Caufield-Daniels (photo of Ross and Caufield-Daniels from Sports Illustrated)
Posted by Kara at 7:41 PM