The Other Uniform: A Tradition of College Football 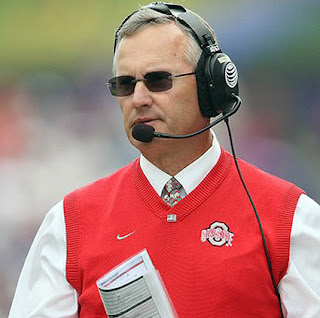 We all like to predict the outcome of upcoming sports seasons. Pre-season rankings give us an indicator of how our team is expected to perform. More often than not, a few teams move several rungs from their pre-season ranking after only two outings. In 2009, the University of Oklahoma football team began the season ranked third. After quarterback and 2010 number one overall NFL draft pick, Sam Bradford received a season ending injury against Brigham Young, Oklahoma dropped to 13th in the week two USA today poll. Anything is subject to change in sports.
Well, almost anything. When you picture Ohio State Head Coach Jim Tressel in your mind, what do you see? Ohio State neck tie, short-sleeve, white collared shirt and red Ohio State sweater vest…or possibly a silver one to dice it up. What about Bob…Stoops? Oklahoma golf shirt and white Oklahoma visor hat with a breast cancer awareness pin on the side. Bobby Bowden? Some version of a Florida State coat or jacket. Isn’t it warm in Florida? Speaking of jackets…how old an un-kempt might that blue Penn State jacket of the legendary Joe Paterno’s be? Of course, these staple coaches uniforms, steeped in superstition and tradition, are not exclusive to NCAA football. You can usually count on Bob Huggins, head coach of West Virginia Men’s Basketball, to wear a warm-up suit to his games. Level of game deep into the NCAA Tournament having no affect on his wardrobe. Oh, and I see a lot of MLB managers consistently wearing baseball uniforms to the ballpark. Well, you can cross that one off this list, but let this stand as a side note that I have never understood that tradition. Hey…borrow Huggins’ warm-up suit idea!
One appeal of college sports is the plethora of traditions held by each university and nation of fans. I certainly celebrate that! Ladies, I do advise you to make an effort to keep that Oklahoma visor your significant other has to golf course outings only.
Posted by Kara at 2:53 PM