For Love Of The Diamond 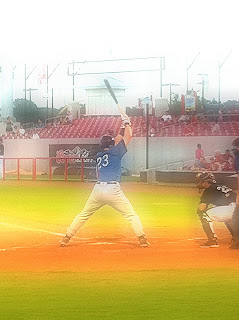 This is the inagural season for Target Field, home to my favorite baseball team the Minnesota Twins. I have been jealous of each friend who has sat in attendence, though I know someday my time will come. Listen up, the Twins aren’t the only baseball team in the Twin Cities to have earned a little piece of my baseball heart. A mere 14 miles from Target Field is Midway Stadium. Built in 1982 and holding 6,000 seats, Midway has averaged 98% capacity for all regular season games played. Welcome to St. Paul Saints Baseball. I would say it is a lil slice of Heaven, but that would be pretty lame. The Saints are members of the American Association of Independent Professional Baseball. Listen to a radio broadcast and you will know their most loyal sponsor is the local Catholic church, and the Saints’ spot-on, hard-working an loyal “clubbie’, Luka, is sometimes paid in drinks and burgers. Sceptical? Asking who wants to watch independent ball? I hear ya. However, this former home to MLB stars such as Darryl Strawberry and J.D. Drew, has locally televised every home game in the team’s history…and NO OTHER professional baseball team can claim that. Once you get a feel for this charming team, you can’t help but root for them. Guys that are playing purely for the passion and dreams of baseball, just hoping for a shot. Some are leaving behind wives and children states away, and some are barely old enough to drink on the bus! Then a few are…well…pretty dang amazing. First baseman/designated hitter Ole Sheldon, number 23, serves as the Ortiz, Howard, Pujols of the group. Batting a modest .273 for the season, he leads the Saints with 17 home runs, nine being the next best. Sheldon has a team high 311 at-bats resulting in 65 R.B.I. (runs-batted- in) and 85 hits. Now this may not catch your eye, but with a batting stance that will raise an eyebrow and a record number of um…adjustments per game, Sheldon deserves a shout out.
I have never known someone to be more screwed over at work and complain so little as Sheldon. For years, work ethic, determination, talent, personality and patience were not enough to overcome the politics of an Astros organization ridden with blind eyes. Told he could never hit home runs, Sheldon now sticks his bat up to the Astros and continues to pull long balls. Sometimes guys are in the right club at the right time and move up quick, sometimes guys are just more talented and sometimes you just have to pick up and keep swinging…whever you end up. Go Saints! (Thanks to Luka for my really sweet hat!)
Posted by Kara at 9:50 AM