Out With the Old…Mike Modano stirs up interesting debate. 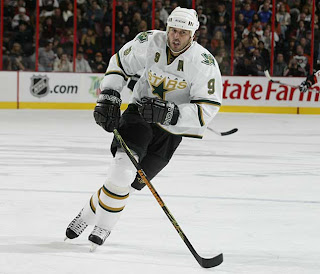 Think about that old guy that you work with about whom it is said once a week “why doesn’t he just retire? If I was his age I would be long gone!” We end up thinking that it would be much easier to have this guy…who is very personable and is looked to as a leader…move on and make room for someone younger with a fresh spin on things.
This is not unlike the Mike Modano “situation” that became a final decision June 30th. After 22 years with the NHL, Mike Modano was asked to depart from the Dallas Stars. This spurs the debate: was it fair to force a guy who was once considered the face of the franchise, out instead of allowing him to decide his retirement date?
Modano was drafted in 1988 by the Stars organization as the first overall pick. The center has not been a front line player for the last two years. In 2009-2010, Modano played in 59 games and had 14 goals in 16 attempts. Compare this with Patrick Kane of the Chicago Blackhawks who played in 82 games and had 30 goals in 58 attempts…plus a trip to the 2010 Winter Olympics in Vancouver. Kane, right wing, was also drafted as a first overall pick by Chicago in 2007.
Mike Modano isn’t the only geyser on the block that has left club owners thinking it might be time to alleviate his salary from the payroll. What about former Seattle Mariner Ken Griffey Jr.? Griffey was the 1st overall pick for Seattle in 1987 and made his MLB debut in 1989 with 455 at bats, 61 runs, 120 hits, 16 home runs and a .265 batting average. Last season the designated hitter (DH) for Seattle had 387 at bats, 44 runs, 83 hits, 19 home runs and a .214 average. Ah, DH, where baseball greats ride out their career with ease! American League MVP in 2009 and Minnesota’s 2001 1st overall pick, Joe Mauer had 523 at bats (out DL for first part of season), 94 runs, 1914 hits, 3 home runs and a .302 batting average as starting catcher. Ken Griffey Jr., made the decision to retire in June of the 2010 season.
Arguably the most controversial example is that of NFL great Brett Favre. After dragging his feet about retirement and joining the Minnesota Vikings for the 2009 season, Brett Favre posted 363 completions in 531 attempts, for 68.4%, 7 TDs and 7 interceptions. The 1991 draftee (2nd round pick of the Atlanta Falcons) played his first season with Green Bay in 1992 with 302 completions, 471 attempts for 64.1%, 18 touch downs and 13 interceptions…only 3 seasons prior to his 1996 NFL Championship season. Peyton Manning was the 1st overall pick of the 1998 draft for the Indianapolis Colts. In 1998 he had 326 completions in 575 attempts for a 56.7 percentage, 26 touchdowns and 28 interceptions. In 2006 he led the Colts to a Super Bowl Championship and in 2009 had 99.9 completions in 393 attempts for percentage of 68.8, 33 TDs and 16 interceptions. Seemingly, these QBs have the best argument for sticking around, as both Manning and Favre have gotten better with age.
This debate only exists because fans look to these athletes in a nostalgic light. “But I started playing baseball because I wanted to be just like Ken Griffey Jr.,” “But Modano was the reason I grew to love hockey!” These are points to note, however, that is why we have hall of fames. We are given the opportunity to appreciate the career of our favorite athletes, all the while…teams have space on their payroll to bring in a rising star that will be the reason for new generations to fall in love with the sport! Let’s find the room to bring in these young guys who have worked hard for their big shot…room on the payroll and in our fan club.
Posted by Kara at 9:40 PM