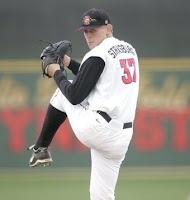 Cy Young once said, “Gosh, all a kid has to do these days is spit straight and he gets forty-thousand dollars to sign!” I assure you Stephen Strasburg didn’t have to spit at all! Strasburg, baseball prodigy and pitcher for the Washington Nationals, will make his major league pitching debut tonight (Tuesday, June 8, 2010) in Washington against the Pittsburg Pirates. It is the most anticipated debut in MLB history. Care to know why #37 Jerseys have been selling like water on a hot Texas day…when Strasburg hasn’t played one major league game?
Strasburg, 21 native of San Diego, has sold out every venue he has pitched in since high school. Tickets to his debut with the Nationals sold out in two hours and 200 media credentials were distributed, three times the normal amount. The 2009 Baseball America High School Player of the Year skipped his final two seasons of high school ball and earned his GED to play baseball at San Diego State Junior College in 2010. His record at San Diego State was 8-3, with a 1.57 earned run average and 133 strikeouts in 97 1/3 innings. And…just so you won’t question his ability as a well-rounded star…he can also play third base (3B) and right field (RF).
Beyond highly touted and compensated to reflect his clout, anyone with even a slight interest in baseball should wonder…will he be worth the hype? Strasburg was handed a 15.1 million dollar signing bonus in the 2009 Major League Baseball Draft as the number one overall pick by Washington. In 2001 the Cubs drafted pitcher Mark Prior for 10.5 million (record setting signing bonus till the 15.1 million awarded Strasburg) Prior was released by the San Diego Padres in 2009. Another prospect in 2001 was dealt 9.5 million by Texas Rangers. However, Mark Teixeira, also a client of the famed agent Scot Boras (known for being a lethal negotiator in baseball and Strasburg’s agent) has had a little better luck. Teixeira garnered the largest signing bonus given to a position player (3B) in draft history. After seasons with the Rangers, Angels and Braves…Big Tex signed a Texas sized $180 million dollar package deal with the New York Yankees in December 2008. In addition to owning a 2009 World Series Championship ring, he also led the AL in both home runs (tied with Carlos Pena of Tampa Bay) with 39 and RBIs with 122.
So will Strasburg be a Mark Prior or a Mark Teixeira? Reports are that he will be a Stephen Strasburg and unlike anything seen in baseball history. The excitement surrounding him is certainly unlike anything the Washington Nationals have ever seen. For now it is watch and wait…something the baseball loyal will all be doing tonight!
Posted by Kara at 6:05 PM