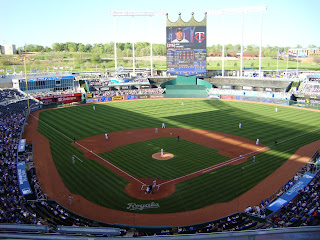 How does a trip to the City of Fountains sound? Not Rome…the official City of Fountains. Kansas City has more fountains than any city other than Rome at over 200 in total. Perhaps none of these fountains is more famous than the fountains of Kauffman Stadium, home of the Kansas City Royals. The weekend after I returned from San Diego and my visit to Petco Park, I made a day-trip to Kansas City to visit Kauffman Stadium and watch the Royals play the Twins. Since, Kauffman is in somewhat of a remote location the only notable view once inside the park is of the fountains, but it is still a really great park to watch baseball.
Parking is made very simple at Kauffman Stadium, since there is only one choice. You will park in a massive lot that is shared with the Chief’s Arrowhead Stadium, and you will pay $10. Drop-offs will be tricky. There could be a Midwest chill in the air if it is early or late in the season, but the weather should be nice and warm if it is summertime in Kansas City. It might be a good idea to get to the stadium early if you are not willing to miss a couple of innings of the game to visit the Royals Hall of Fame. This museum, found in left field, is a must see. Exhibits are not limited to Royals history and tributes to George Brett, but also include American League memorabilia and the history of the glove and bat. While in the outfield, check out the kids play area, featuring a Royals Carousel.
I suppose the thing to eat in Kansas City is barbecue, and might I suggest dining at Fiorella’s Jack Stack Barbecue while in town, because that is where I ate prior to the game. I am unable to suggest a food selection at the park, however, I would lean toward stopping by Rivals Sports Bar in right field. This sports bar has an open air view of the park and offers a great atmosphere for watching the game. Located just below Rivals Sports Bar is the visitor’s dugout…and just to the right of it in center field is the best experience of Kaufmann Stadium, Pepsi Party Porch. For $45-52 you can secure a spot on this porch for game viewing and a fun and rowdy time. The porch is right in front of the fountains…which light up at night I might add. If you don’t have a ticket for the porch, no worries, the entire area behind it is open viewing, so check out who is warming-up to take the mound or just take in the view. Either way you are sure to enjoy a nice Garth Brooks sing-along to “Friends in Low Places,” and come away singing praises of Kauffman Stadium! I did….and my Twins sadly lost 2-11. 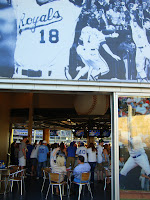 The Fountains at Night 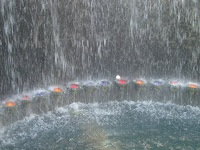